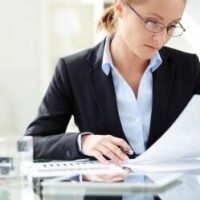 Non-compete agreements are controversial. They’re great for the business who is requesting one, as they prevent competition from their employees. However, they limit employment for the workers, which can lead to stagnant wages. Employees end up stuck at a company with no salary increases or advancement.

There’s often no way around these restrictive agreements. A person cannot even start their own business if it’s going to compete with their current company. Non-competes can be highly limiting and women are affected more than men, studies show.

With non-compete agreements, there’s a fear factor involved. People take them seriously, and they’re afraid of getting sued. And women traditionally stay on the safe side, with men being the ones to ignore the non-competes and take the risks.

Not only that, but when it comes to failure, women are penalized more than men. It happens in a lot of industries, especially medicine and financial services. When women entrepreneurs abandon their startups and go back to working for a company, they face more of a penalty.

When it comes to entrepreneurship, women have a tougher path than men. Women are more prevalent in college and in the workforce, yet men are nearly 1.5 times more likely than women to have their own business. Just one in five businesses are owned by women.

Women face a lot of risks when starting their own business. Not only is there possibly a noncompete agreement that can hinder a woman’s ability to sustain a business, but there are also constraints on hiring employees. On top of that, women tend to start companies earlier in their careers. This means they have earned less money, on average, so if they get sued, the overall expense is higher.

This fear factor does not serve a good purpose. The fear of breaking the rules in a non-compete and getting sued prevents many women-owned businesses from becoming successful. The high-potential businesses are the ones that get blocked. Women tend to create companies that people really care about, and when they fail, it makes the gender gap even greater.

The good news is that many lawmakers are seeing the effects of non-competes and are taking steps to limit them. In July, President Biden signed an executive order encouraging the Federal Trade Commission to limit the use of non-compete agreements. Even some states are limiting them. Massachusetts passed an act several years ago, while Illinois will limit them starting January 1.

Non-compete agreements may seem like a good idea for many businesses looking to stay competitive, but these documents limit a person’s employment options. Women are especially affected.