What Is The Future Of Non-Compete Agreements? 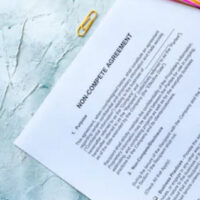 When you think of non-compete agreements, you probably think that they are for high-end jobs such as those in the technology and medical fields. However, employees in virtually every industry are seeing them, from hairdressers to janitors to retail clerks to fast food workers. They cannot begin their position until they sign one.

Non-compete agreements are rarely beneficial to employees. They create less competition for companies and make it difficult for workers to leave their jobs. Their agreements may be highly restrictive. For example, they may not be allowed to work within 50 miles of their employer for a period of one year or longer. This is especially frustrating to deal with in this tough economy. In some cases, workers are forced to move or break the clause, leading to legal issues.

The good news is that employees have someone on their side: President-elect Joe Biden. Biden is already planning to be aggressive when it comes to non-compete agreements. He hopes to minimize their use and fully ban no-poaching agreements. No-poaching agreements are between employers, who agree not to hire each others’ workers from one another. When these types of agreements are in place, it becomes difficult for workers to work for a competitor for better wages.

These agreements do nothing but suppress wages, according to Biden. They keep employees in unfavorable positions, making them unable to seek a better workplace environment. He believes that companies should have to compete for workers. Currently, almost all states enforce non-compete agreements. California, North Dakota, Oklahoma and Montana are the few states that totally ban them.

The coronavirus pandemic has led to a significantly high unemployment rate. There are more than 12 million people without jobs. Given these statistics, it is not surprising that President Biden and Congress would work to implement a federal law banning non-compete agreements. If a federal law is not passed, there will likely be changes at the state level.

If these methods do not work, Biden could get help from the Federal Trade Commission (FTC). The FTC has the power to prohibit unfair or deceptive methods of competition, which means it can prohibit noncompete agreements.

Non-compete agreements have gotten out of hand in recent years. While they serve some purpose for companies in competitive fields, they don’t need to be used in every industry. In many cases, they do more harm than good.