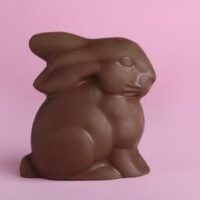 It’s a battle of European chocolatiers as Swiss brand Lindt has sued Lidl, a German discount retailer, for replicating its popular chocolate Easter bunnies. Lindt claimed that the two bunnies, which are both wrapped in tinfoil, are almost alike.

Switzerland’s highest court did side with Lindt in the dispute, giving it protection from copycat (copybunny?) products. Lidl must stop selling the bunny-shaped sweets immediately. The court also ordered “destruction,” although the term is being used loosely. It is recommended that instead of outright destroying the offending chocolate, Lidl could melt down the chocolate rabbits and create something else.

Lindt has no problem doing what it takes to protect its popular chocolate, going to court several times over the past few years to protect its popular Easter treat. Indeed, the company sells tens of millions of the chocolate-shaped rabbits each year. The three-dimensional bunny has been trademarked since 2001. Even the golden shade of the bunny’s foil wrapping has trademark protection.

So when it comes to Lindt’s and Lidl’s versions of the chocolate bunnies, the Swiss court ruled the way it did because it claims you might be confused about which brand is which. In comparing the two bunnies, the biggest similarity is that the gold foil seems to be the same shade. However, the Lindt bunny’s bow is bright red, while the Lidl bunny sports a smaller green bow with a silver bell. So the bunnies are not exactly the same. There are slight differences, but if you’re not paying attention, you might be disappointed if you choose the Lidl bunny over the Lindt one.

Can You Copyright a Recipe?

While this court case shows that you can copyright the appearance of a food or sweet, the law typically states that the food itself and even the recipes cannot be copyrighted. That’s because when it comes to recipes, there is a fine line between the ideas (ingredients and directions) and how they are expressed. Because recipes are factual and functional, they cannot be copyrighted. They are not specifically a creative work.

But there is one exception. Recipes can be protected under copyright law if they include “substantial literary expression.” This is why bloggers often share stories and personal anecdotes alongside a recipe’s ingredients.

Has someone ripped off your work? Are you concerned about your ideas? If so, an Orlando trademark & copyright lawyer B.F. Godfrey from Godfrey Legal can provide effective  representation when you feel your work has been used inappropriately. Schedule a consultation with our office today by calling (407) 890-0023 or filling out the online form.