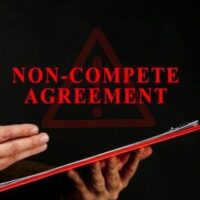 Non-compete agreements are a controversial subject. These contracts are between employer and employee and prohibit the employee from competing with their former employer upon separation. The non-compete may prohibit activities such as working for a competitor, starting a competing business, hiring former colleagues, or developing competing products or services. These documents often include geographic restrictions and are valid for a set period of time.

The use of non-competes was originally based on state laws. While states such as California and Oklahoma ban these agreements, Florida will allow them if they are not too broad. Many states, such as Arizona, Alaska, Ohio, New York, Tennessee, Iowa, and South Carolina, have no specific laws on noncompetes.

The federal government got involved last year, though. In July 2021, President Joe Biden signed an executive order, directing the Federal Trade Commission (FTC) to use its rulemaking authority to address noncompetes.

Currently, all types of employees are being hit with noncompete agreements. They include not only those who are making six figures and have high levels of education or specialized skill sets, but also those who have a much lower level of education and are making less money. Studies show that 18% of workers are currently bound by a non-compete agreement, and 38% of workers have signed one in the past. Of those earning less than $40,000 per year, more than 10% are bound by a non-compete, with 33% claiming to have signed one in the past.

The likelihood of being bound by a non-compete is based on a variety of factors, such as age, education, earnings, and job function. What this means is that employees with seniority, advanced degrees, and specific skills are more likely to have a non-compete  than those with little education and experience. Studies show that employees 18–22 years old have a 16% likelihood of having a noncompete,  while the peak age is between 35 and 40, at 24%.

There is a case for banning non-compete agreements. Going without them can increase hourly wages by an average of 2-3%. Over a seven-year period, that may rise to 6%. Job-to-job mobility among hourly workers increased by as much as 18%, according to some studies.

Non-compete agreements are not always used like they should. In most cases, they end up benefiting the employer, limiting the worker’s employment.

Before you sign a legal document from your employer, contact Orlando non-compete agreement lawyer B.F. Godfrey from Godfrey Legal first. We’ll address your concerns and make sure you are protected. Schedule a consultation by calling (407) 890-0023 or filling out the online form.