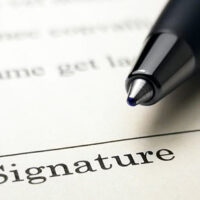 The president is trying to create more jobs. Minimum wage seems to go up almost every year. Still, the United States’ economy is still not booming like it should. Why not? Blame it on the companies.

Companies are doing what they can to stay competitive. Nobody wants to waste time and money on a new hire, only to have that person quit within the year and then get hired by a competitor. This allows an employee to share trade secrets they learned from the previous company, which can be detrimental to that company.

To prevent this from happening, many companies require employees to sign a non-compete agreement. A non-compete agreement forces that employee to stay with that company. While they can leave the company, they are restricted as to where they can work. For example, they may not be able to work for any company in the same industry within 50 miles and within one year after signing the agreement. This is just an example; the time period and mileage may be greater in some cases.

While non-competes are primarily found in tech companies, they can be found in virtually any industry. For example, they have been found in janitorial services, hair salons, publishing companies and even fast food restaurants.

Non-compete agreements are benefiting companies and hurting workers. They prevent any real competition and they kill innovation. Workers are kept from leaving their jobs and earning more money. They lack motivation and are miserable. This has kept wages stagnant in the U.S. Workers can’t move up and they get poorer and poorer.

Businesses use non-compete agreements to stay competitive. While such a document has many benefits for employers, employees are given very little incentive to sign one. Many are stuck with their employers for many years or they are forced to move or work outside their industry in order to earn a living wage.

Should you sign a non-compete? These agreements are enforced in courts and taken quite seriously, so what are your options? Orlando non-compete agreement lawyer B.F. Godfrey from Godfrey Legal can help you make the right decisions so you have no regrets. Schedule a consultation today by calling (407) 890-0023 or filling out the online form.