Women-Owned Sole Proprietorships on the Rise in Florida 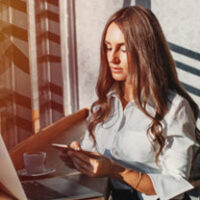 When it comes to working and making money, it’s no longer a man’s world. Statistics show that businesses created by women are on the rise across the country. Florida is no exception.

Over the past year, women have started an average of 1,821 new businesses every day. Florida has seen the highest growth in the past decade, particularly in the Jacksonville area. In 2002, the city had 26,107 businesses owned by women. That number has more than doubled since then. Currently, there are approximately 57,000 women-owned businesses in the city. This is a 6.3 percent increase over the previous year, which is higher than the national average of 5.7 percent.

Jacksonville woman started an average of nine new businesses a day in the past year. Most of these businesses are sole proprietorships, meaning there are no employees.

However, more and more women-owned businesses in Jacksonville are hiring. This number has grown 5.4 percent in the past year.

Causes for Increase in Women-Owned Businesses

What is causing the current drive in growth? Experts say that necessity as well as opportunity are pushing women to take the plunge and venture out on their own. Many women are overqualified or unemployed for lengthy periods of time. Some are simply unable to find a job that suits them. Many are frustrated by the disparity in pay based on race and gender. Between 2007 and 2018, the number of businesses started by women of color has increased by a whopping 163 percent.

Contrary to popular belief, young entrepreneurs are not all that common. Many of these business owners are older, with more than 65 percent over the age of 45. That’s because they have spent some time acquiring skills and money to make their dreams come true.

Instead of working for someone else, they create their dream job and work for themselves. For some women, though, they simply see a need in the current market that can be fulfilled by starting their own business.

The current economy is tough, and people are getting turned down for the jobs they want. This is resulting in entrepreneurs starting their own businesses. Women are starting to show off their business savvy and create their own companies.

Many of these companies have no employees, so they are labeled as sole proprietorships. This often means increased liability for the business owner. If you are considering starting your own business, make sure you understand your legal rights and responsibilities. Orlando sole proprietorship lawyer B.F. Godfrey from Godfrey Legal can help you make the right decisions to secure your company’s future. Schedule a consultation by filling out the online form or calling (407) 890-0023.